Synopsis: There was an 8-fold increase in the incidence of coccidioidomycosis in endemic states from 1998-2011 – with more to come.

Clinicians in California and Arizona have been aware of an apparent increase in their number of encounters with patients with coccidioidomycosis over the last decade and this has been confirmed in several publications. In addition to these 2 states, however, areas of endemicity exist in Nevada, New Mexico, and Utah, as well as in western Texas (but, unfortunately, coccidioidomycosis is not reportable in Texas). The CDC provides a broad picture of the changing epidemiology of coccidioidomycosis in the U.S. by analyzing data from the National Notifiable Diseases Surveillance System (NNDSS) for the years 1998–2011. 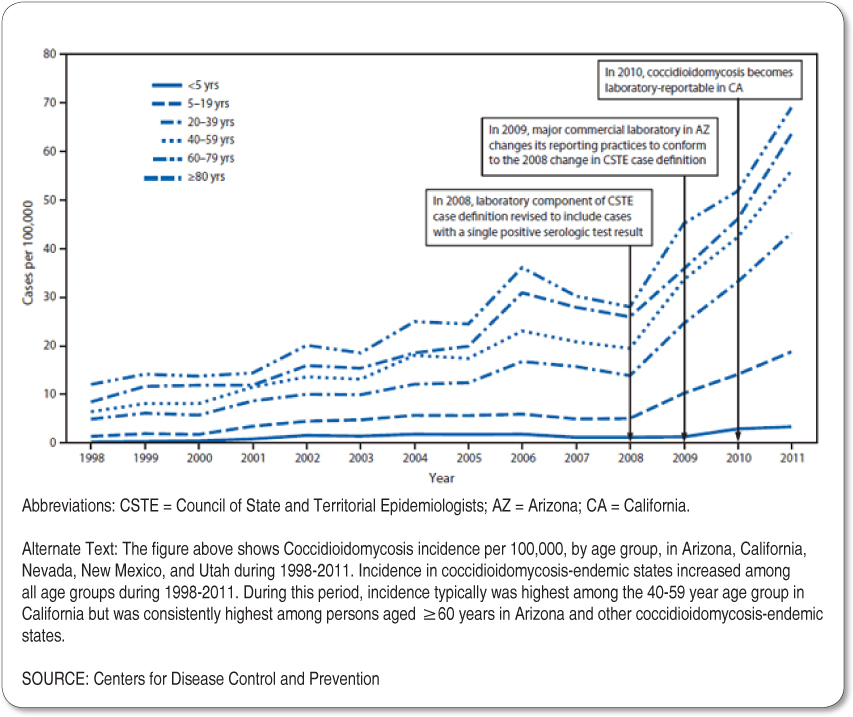 In 2011, coccidioidomycosis was the second most commonly reported nationally notifiable condition in Arizona and the fourth most commonly reported in California. While some of this increased incidence described by CDC may be related to improved diagnosis, it is likely that the numbers still represent an underestimate of the extent of the problem. Despite the fact that studies have shown that coccidioidomycosis may account for approximately one in 5 cases of community acquired pneumonia in urban areas of Arizona, a very large proportion of these go undiagnosed — hardly an advertisement for diagnostic acumen.1 Despite the increase in reported cases, overall U.S. coccidioidomycosis mortality rates have remained fairly stable at approximately 0.6 per 1 million person-years during 1990–20082, suggesting that the most severe life-threatening cases are being identified by clinicians and are being appropriately treated.

New foci of infection are still being identified as in the case of the description of 3 cases of coccidioidomycosis in which the infection appeared to have been acquired in eastern Washington state.3 In addition, the human population in endemic areas is expanding and, in the process, disrupting the source of Coccidioides species, the soil. The construction if Interstate 5 running the length of the central valley of California was almost disrupted as a result of a large number of cases of coccidioidomycosis in workers. California is about to begin construction on its “bullet train” system, with the first portion to be built in the San Joaquin Valley, from Merced (“Gateway to Yosemite”) to the San Fernando Valley and Los Angeles. Arizona is also considering construction of a high speed rail system. These activities will guarantee business for physicians expert in the management of coccidioidomycosis.