Home » CAM Use in Turkish Children with Cancer
ABSTRACT & COMMENTARY

CAM Use in Turkish Children with Cancer

Vitamin For Thought: Recent Research on Use in Older Adults

SYNOPSIS: CAM use by children with cancer being treated at a hospital in Turkey was common and led to several perceived benefits — such as increased blood values, morale, and general condition — but did not affect overall survival.

The researchers of this study attempted to move beyond simply answering the question “what complementary and alternative (CAM) treatments are children with cancer using, if any” by also exploring “do CAM treatments make a difference on survival.” This analysis took place in the pediatric oncology department of a hospital in Bursa, Turkey. The researchers cite several prior studies in Turkey analyzing CAM use, adding to why it might be compelling to do some follow-up work and comparisons to prior research.

The parents of 120 children (50 girls and 70 boys) completed a multi-part questionnaire eliciting information about sociodemographics, cancer specifics, CAM use, beliefs about CAM effects and reason for CAM use, the time of CAM initiation, and physician awareness of the CAM use. The cancers were lymphoma (39%), nervous system tumors (25%), sarcoma (13%), Wilms tumor (12%), and other (11%). Of the 120 children, 88 (73.3%) use some type of CAM during or after cancer treatment. The CAM types used by the patients are shown in Table 1. The authors followed the United States National Institutes of Health National Center for Complementary and Alternative Medicine definitions for their CAM categories. For example, biological-based therapies included dietary supplements such as vitamins and herbal medicines.

Table 1: CAM modalities used by the patients in this study, including combinations of therapies 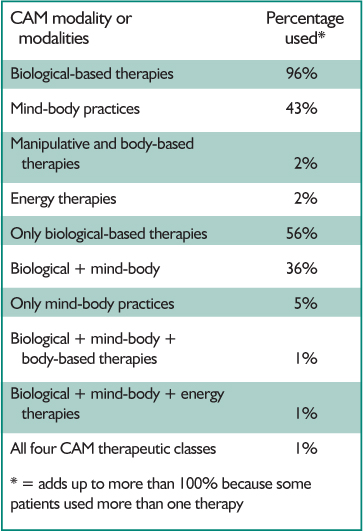 Specifically, of the patients using biological-based therapies, the most common herbal medicine used was stinging nettle (Urtica dioica, form not mentioned), followed by honey, grape molasses, bee pollen, rose hip, black seed, and “herbal teas.” It was also common to add drinks and food (i.e., artichoke and broccoli) to the mixture. A variety of other products (such as turtle blood and shark cartilage) were used by only one or two patients. No details were provided about the reasons for use of these therapies specifically, nor proposed, proven, or perceived mechanisms of action.

The benefits mentioned by the families for CAM, in general, were to increase blood values, increase appetite, improve general condition, and improve morale. The researchers reported that “no serious side effects” were reported, but failed to detail the presence or type of less serious side effects.

With respect to timing of CAM interventions, 60% began CAM after the disease was controlled, 36% at the moment of diagnosis, and 4% when the disease recurred. The 5-year survival for CAM users was 81.5% and for CAM non-users was 86.5% (P > 0.05). No comment was offered about this finding, and, given that the statistical power of the trial and effect size were not mentioned, it is difficult to surmise whether this finding is spurious or a trend worth exploring. Some characteristics relative to the type of patient being studied were detailed about the two groups and were found to be similar for CAM users and non-users.

Tables provided show that CAM users and CAM non-users were statistically identical with respect to parental or patient age, number of siblings, educational level of the parents, place of residence, diagnosis, treatment(s), recurrence, family history of cancer, belief in recovery, socioeconomic status of the family, and confidence in medical treatment.

Many surveys of CAM use have been done in recent years, helping those interested in the topic to learn about who is using what integrative therapies and for what reasons or diagnoses. This article adds to our knowledge of the field, expanding on CAM prevalence use data into the specific area of pediatric oncology. Yes, the survey was done in Turkey, compromising its direct applicability, perhaps, to patients in the United States. However, its use percentages were in line with what is known about the use of CAM by cancer patients in the United States (one review found that 59% of U.S. pediatric cancer patients used CAM1), and this study’s exploration of survival data adds an important new twist to the way clinicians should think about what our patients are doing outside of the clinic doors: Does it work, and, ultimately, is the intervention helpful with their symptoms, quality of life (not addressed here), or prognosis? There may be reasons to doubt the believability of the survival data, such as the ad hoc choice of a control group, but it is admirable that the researchers went beyond many of the published use surveys by at least attempting to explore outcomes.

The paper could have been strengthened by providing details, especially for the biologically based therapies, about reasons for use. Interestingly, the products mentioned were, for the most part, quite distinct from anticancer botanicals on the radar of researchers and clinicians in the United States. One interpretation of these results is the presence of culture-specific approach to health and disease, a reminder to clinicians to query patients in a sensitive way about their health cosmology.

Taking a look at the big picture, CAM use in this demographic outpaced CAM use in the general population; recent reviews find that approximately 40% of people in the United States regularly use some form of CAM,2 whereas in this study, more than 70% used at least one CAM method. It is a reminder to clinicians who work in oncology or with patients suffering from any of a variety of severe or chronic illnesses to explore CAM use by encouraging disclosure, if not providing guidance about incorporation into an integrative treatment plan.

Some other nuances from this study deserve mention. A common oncological concern is the delay of conventional therapies (and therefore compromising a positive outcome) when pursuing CAM therapies. In this study, though, most of the patients began CAM after the disease was controlled; CAM use did not appear to replace conventional treatments. Also, even though 5-year survival was not significantly different in the CAM use group, several perceived benefits were documented. These benefits were not quantified using standard scales, but were a vision into why the patients and families turned to CAM. Interestingly, it seemed that the perceived benefits filled gaps where pharmaceutical treatments and allopathic medicine in general are notoriously weak. That said, it would have been more convincing had the researchers actually measured laboratory values or weight, or used proven tools to measure, say, quality of life, and compared those values with the control group. Nonetheless, the benefits mentioned were important ones to the families involved, and may have been enough to justify risks and costs associated with those therapies. To actually prove that hypothesis, however, is a task for future work in this field.