Early use of Daptomycin Compared to Vancomycin for MRSA Bacteremia

The novel coronavirus which emerged in the Middle East, now officially called MERS-CoV (Middle East respiratory syndrome coronavirus), has continued to cause new, often fatal infections. As of June 7, 2013, there have been 55 laboratory-confirmed cases of infection worldwide, according to the Centers for Disease Control and Prevention.1

In consultation with the WHO, the period for considering evaluation for MERS-CoV infection in persons who develop severe acute lower respiratory illness days after traveling from the Arabian Peninsula or neighboring countries has been extended from within 10 days to within 14 days of travel, the CDC advised. The FDA recently issued an Emergency Use Authorization to allow for expanded availability of diagnostic testing in the U.S.

Saudi Arabia accounts for the most cases by far, with 40 confirmed infections and 25 fatalities, while cases have also been detected in Jordan, Qatar, Tunisia, the United Arab Emirates, Germany, Britain, France and, most recently, Italy (See Table 1, right). Jordan, Qatar, United Arab Emirates, and Saudi Arabia have each had authochthonous cases and Germany, France, Italy, Tunisia and the United Kingdom have had cases associated with travel or contact with a returned infected traveler.

The median age of the first 40 cases was 56 years, ranging from 24 to 94 years; 79% were male. Sporadic cases in the community without known exposure have occurred, as well as cases resulting from contact with family members. Person-to-person spread within healthcare facilities has also occurred. A cluster of cases at Al-Moosa General Hospital, a 150 bed facility in Hofuf in the Al-Ahsa region of the Eastern province of Saudi Arabia involved 22 patients, the first identified on April 24 and the last on May 1. Ten of the 22 have died. Cases occurred in family members of patients, as well as in healthcare workers.

Coronaviruses infect a variety of mammals. The natural reservoir of the SARS coronavirus was the horseshoe bat, while palm civets acted as intermediate hosts. While bats are suspected by many, the reservoir of the MERS-CoV has not at the time of this writing been determined. Although it seems likely that camels are an important reservoir, a 73-year-old male from Abu-Dhabi, who died in a hospital in Munich, Germany on 26 Mar 2013, had been exposed to one of his racing camels that was sick. A variety of animal specimens are being examined for evidence of infection. 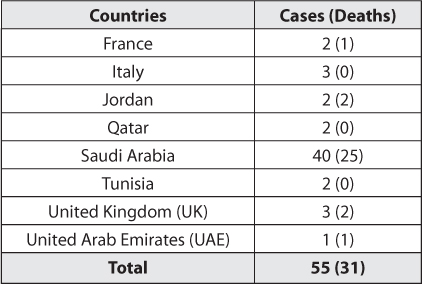